Getting real about mom guilt, with Kristen Mittler 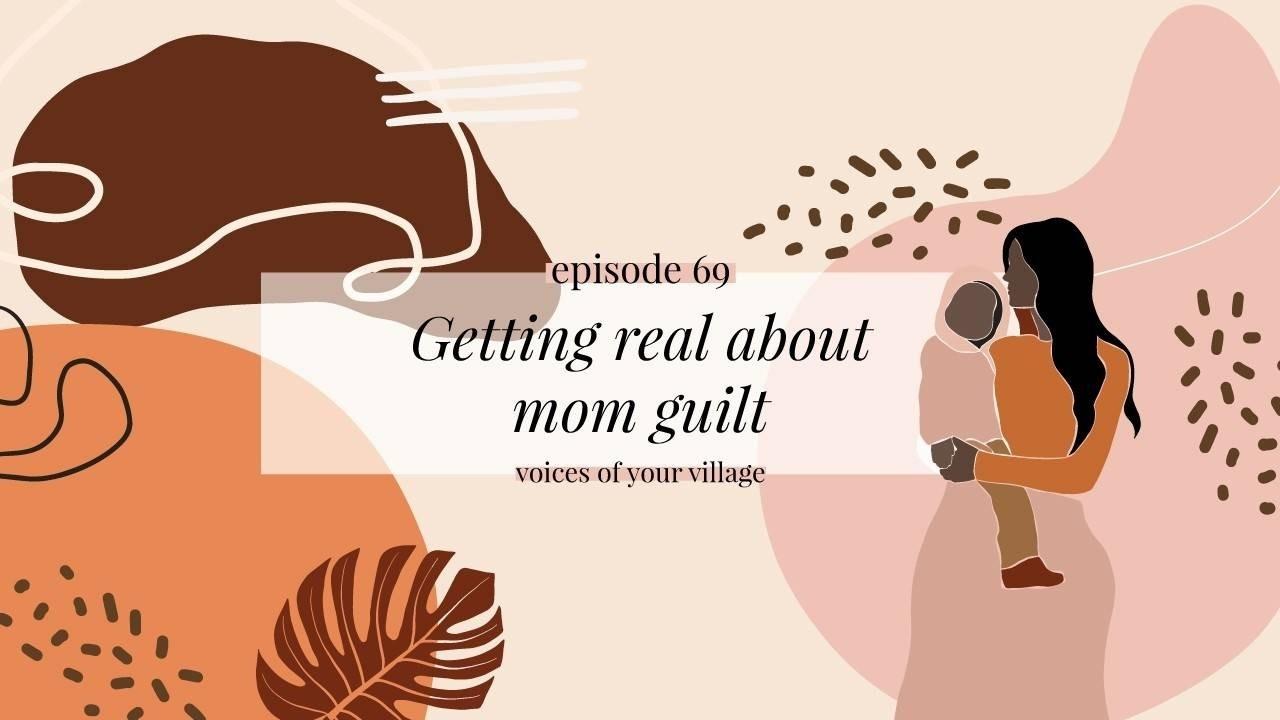 Today on Voices of Your Village, we are getting real about mom guilt - that inevitable feeling felt by so many mamas out there. This is one issue that seems to truly be gender-specific; I chatted with a bunch of dads in preparation for this episode and came to this conclusion. In this episode, I got to hang out with my friend Kristen, stay-at-home mama of four, and chat all about this hot topic - what it is, why it’s happening, and what you can do about it.

Mom guilt is felt by both working moms and stay-at-home moms alike. Kristen worked full time up until the point that her oldest kiddo was five, and then became a stay-at-home mom, so she can certainly attest to this. She explained how when she was working full time, her daughter began to prefer grandma because she was her primary caregiver during the day, and this not only contributed to mom guilt, but it was also devastating to her, and one driving factor in what led her to quit her job and start the stay-at-home mama life. She then homeschooled her daughter for two years, until mom guilt began to creep in about that - she wondered if this was the best thing for her - so into public school she went. But, after two years of traditional schooling, she’s back to homeschooling again per her daughter’s request. Kristen agrees that there is guilt on both ends of the spectrum - as a working mom and as a stay-at-home mom. She’s even felt guilty about feeling excited imagining the day she goes back into the workforce - as if it is wrong or something against her kiddos to even have that thought - as if as a mama she should not have any desire for a little bit of freedom. So, if working full time can cause mom guilt, and being a stay-at-home mom can cause mom guilt, how do we navigate this seemingly inevitable phenomenon?

Kristen’s husband tells her she overthinks things, so perhaps that is one place where the concept of mom guilt derives from, and this idea of overthinking things is one factor which makes this a gender-specific problem - we women are really good at over analyzing situations so that we actually end up creating the guilt that doesn’t have to exist, or as Kristen mentioned, create scenarios that aren’t even there and stress ourselves out about them.

I asked folks what they are feeling guilty about, and the answers were all over the map. Kristen and I dove into a few of them, but I think at the end of the day what really matters is that we figure out how to create a self-awareness of our guilt so that we don’t end up in this anxious, guilty place. I asked Kristen what she has found most helpful in terms of trying to identify the mom guilt she has manifested in her mind like so many mamas. She tries to focus on the positive things and acknowledge that her children are thriving, rather than focussing on the negative. She has started to identify when she is feeling guilt and ask herself, “Do you need to feel guilty about this?” The answer is usually no; everybody’s fine. Kristen also believes that a lot of mom guilt is created by what we consume on social media - it can be a beautiful community, but it also subjects us to an opportunity to compare things like our parenting styles to others’ parenting styles. We have to build up our confidence as a parent and realize that just because we don’t do something the way another mom does, doesn’t mean we’re doing it wrong.

There are so many circumstances causing mamas guilt that shouldn’t be. We get caught up in the idea that we must be engaging our kiddos at all times, and if we’re not, mom guilt can set in. If we take a minute for ourselves here and there instead of being all of the things for our kiddos, mom guilt can surface. But I’ve said it before, and I’ll say it again: self-care is essential to successful parenting. It is healthy for mamas to “rest their eyes,” as my mom used to do (we knew if mom was resting her eyes not to bother her unless the house was on fire) for that self-preservation, and it is even important to model this for our kiddos. We want them to see what it means to engage in self-care so that when they are adults, they know not only to do it but how to do it. We all need a minute here and there to be alone and engage in our own thoughts. Your parenting will benefit from self care, and if it helps you show up as the person you want to be in the world, that understanding can be a key to not feeling guilty about it. You and your kids deserve it, mama!

I asked Kristen how she has navigated the feelings of guilt surrounding going from working mom providing an income to stay-at-home mom and not. Kristen admits that this is a tough one for her because she had worked her whole life and it is a little difficult to make that switch. Even though not asked of her by her husband, anytime she spends any money at all, she feels like she should ask permission (even though in reality, she knows she doesn’t need to because she earns everything she gets!). This brings feelings of guilt because she is spending money that she didn’t earn at a job. This has been a big adjustment for her, but I dove into how for some folks, staying home can bring more value to a family than the monetary value earned at a job.

One mama told me she feels guilty that she doesn’t always know what her kiddo needs, and thinks she should, because she’s their mom, right? Kristen agreed that this is a struggle, and she has found it to be more difficult as her kids get older. We tend to put the responsibility of figuring out of the tiny humans’ needs on mom, and this is a societal challenge. From infancy, a baby cries, and we think she needs her mama. We constantly put it on mom to figure out what she needs. Being their mom doesn’t mean you know what they’re thinking or feeling every minute of the day and that’s okay. Sometimes the tiny humans just need their space to feel the emotion, and we really don’t need to figure it out.

A common cause of guilt felt by many mamas comes as an effect of having kiddos close in age - when older brother or sister is still little themselves when the new babe comes along, so not feeling like you gave the older kiddo enough “alone time” before the new baby, or no longer being able to fully dedicate yourself to the oldest. But the truth is, big bro or sis isn’t going to know the difference - it will just be what life is to them, as it will be to you - they won’t know what it would have been like as an only child at an older age because this will now be their life. And Kristen believes you just find a way - there will be chaos no matter the age gap, and she shared that the insanity is such a beautiful thing to be a part of. She also shared that one thing she has recently accepted as a mama with four kiddos (and most close in age) is that her house is no longer clean all the time. She has experienced mom guilt about this, too. We discussed that if you put “clean the house” on your to-do list, something else won’t make the to-do list, and what is that going to be? She employs the “reverse” to-do list - instead of making a list at the beginning of the day, make a list of every little thing you did throughout the day at the end - you will find a massive list and will think you kick butt, and it will alleviate any guilt associated with not getting something in particular, like cleaning the house, done. On Episode 66, a special interview with my mama, she also shares some common perspective on what it’s like having a lot of kiddos, especially kiddos close in age.

Come check us out over on Instagram where we will be keeping the conversation going about this episode and how you feel about it.