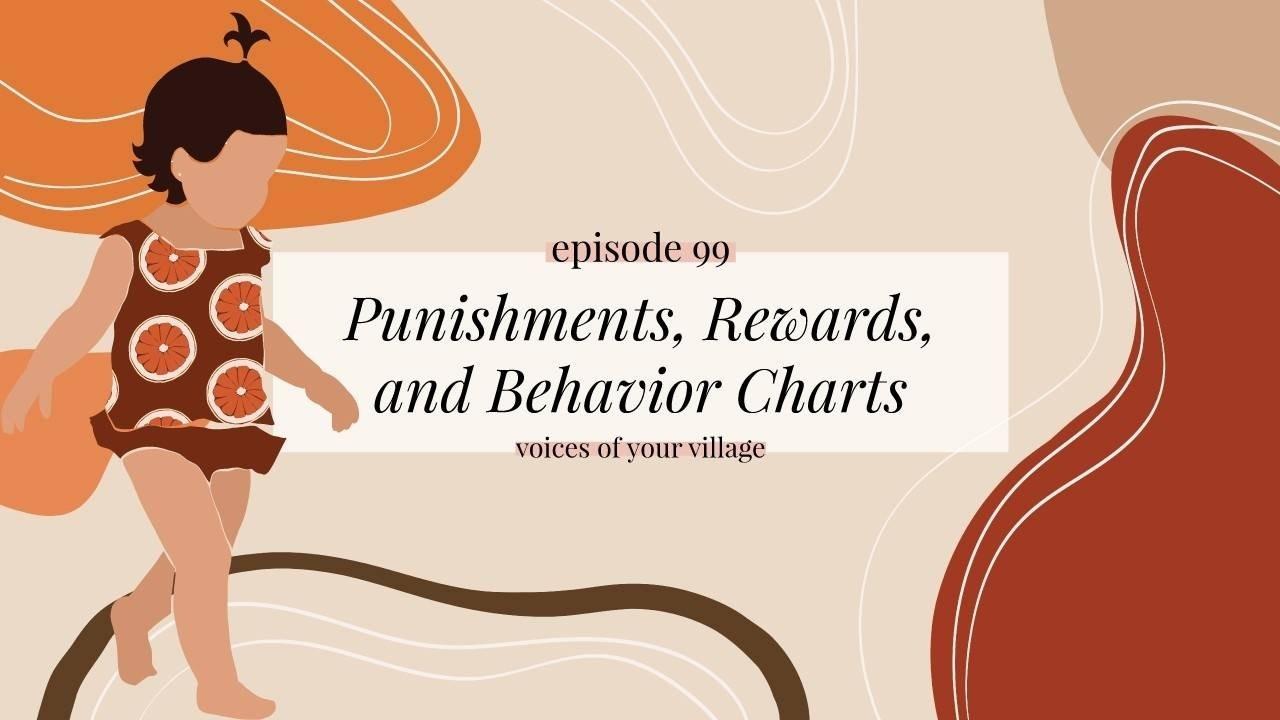 Hey villager, welcome to episode 99 of Voices of Your Village! Before we dive into this week’s topic-  Reward, Punishment, and Behavior Charts- I need to preface this episode by saying it is unlike any episode we’ve ever released before.

I got to interview Alfie Kohn who is widely known for his work on unconditional love and moving away from things like punishment reward systems. He is very outspoken and I find his message to be rather intense. He and I had only half an hour to speak, within that limited time I found it really hard to get a word in. It was a different type of interview than I’ve ever done before. I’ve been holding onto this interview because there is so much about his message that I love, but I feel as though his delivery can come with this idea of Perfection. That there is one correct way to parent or you’ll ruin your child, and I just don’t believe that that’s true.

So, I reached out to you villagers and explained my predicament: that I was holding onto a heated interview and wasn’t sure if I should release it. I didn’t feel comfortable releasing it as it was, and one of my lovely villagers gave me the idea to pause the interview and give you my perspective and thoughts since I was not allotted that grace during the interview. So, we did just that.

If listening to this episode brings you discomfort, I encourage you to lean into that discomfort and bring awareness to it.

Let’s dive in! Alfie has written numerous books and articles about human behavior and parenting. Alfie explains to us that punishment and reward are not opposites, a punishment is a threat “do this or I’m going to do this to you” and a reward is “do this and you’ll get that.” These are both examples of doing things to children, to control them in order to get the results that we (parents, caregivers, teachers) want. They are not ways of working with children. Alfie continues to explain that punishments and rewards, at their best, can only do one thing: short term compliance.

“If the punishment is severe enough or the reward is luscious enough, you can sometimes get someone to do what you want for now– at enormous cost.”

“Part of the reason for that cost is that punishments and rewards are trapped on the surface, in response to behavior. The value of a resource for a teacher or parent is inversely related to the number of times ‘behavior’ appears. In other words, if you are focused on the behavior of the child you are missing their reasons, motives, and needs of the child. In fact, you are missing the child herself,” Alfie says.

This is where I, unable to chime in at the time, express my feelings on the matter. His answer made me think of the visual we use that illustrates behavior, secondary emotions, root emotions, and the unmet need of the child. If you are seeing biting as the behavior, the secondary emotion could be anger, the root emotion could be loneliness, and the unmet need could be the need for a connection. I want you to take this part in recognition that he and I have different opinions: his opinion is that there is one exact way to do this and you can never do it another way, and that’s just not how I see it.

If sometimes you use a punishment reward system because it is working for you right now, that’s fine. Give yourself grace. This is not about perfection, it’s about intention.

Back to Alfie- he continues to explain that although it is possible to change a child’s behavior like you would a pet, by offering them “doggie biscuits for jumping through your hoops” you have actually made things worse through that manipulative action-focused only on the short-term. “If we’re going to help kids become good people in a meaningful way,” says Alfie. “We have to completely move away from any version of punishment, including time out, and any version of reward including positive enforcement.”

Back to me- On the doggy biscuit note (another piece of shame here) I had a question, a lot of workplaces if you meet your goal you might get a bonus or promotion. There are rewards in our everyday system, I don’t think moving away from them entirely is the way to go.

Finding balance in reward systems is the goal here, not moving away from them altogether.

Today’s episode follows this pattern for the duration. Alfie will make a grand pronouncement and I pop in with thoughtful hindsight to share my piece.

I see only positives in leading with love and acknowledgment.

And that is what I sought out to accomplish with this interview and commentary. Listen to the episode above to dive into the discussion with us! I can’t wait to chat more about what we’ve accomplished here with our village. Let me know what you think over in our Facebook Group and on Instagram.