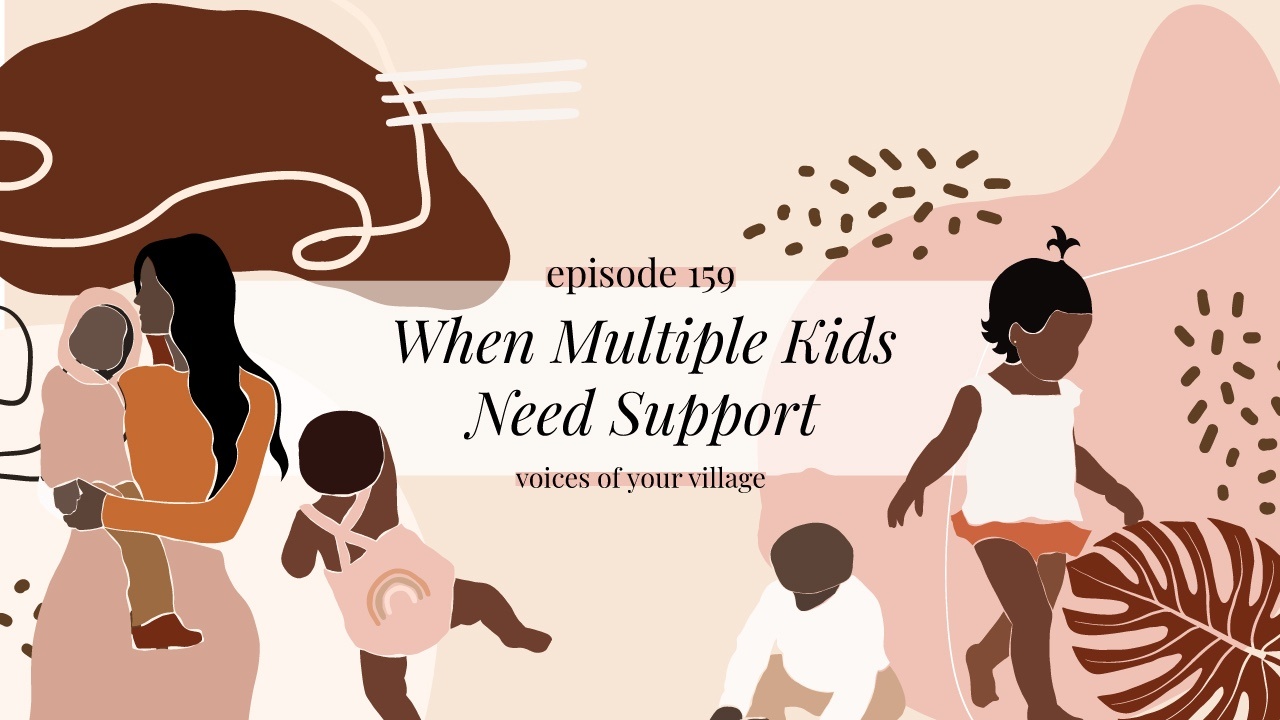 You're listening to Voices of Your Village. This is episode 159. So often folks reach out and they're like this sounds great. If you have, like, one kid and you can devote all your attention and time to them to respond and all that jazz, but what do you do when multiple kiddos need your support? That's what so much of this work has looked like in practice for me. It's very rare that I have had one child where I can devote my time and energy to; most of this practice for me has been in a setting where I have seven infants or nine toddlers or 18 preschoolers or multiple kids in a home of different ages and stages. So I was really jazzed to get to dive into what this looks like in practice like in actuality. How do we support multiple kiddos at once? How do we know who needs us more? How do we triage the situation? So without further ado friends, let's dive in.

Welcome to Voices of Your Village, a place where parents, caregivers teachers and experts come to support one and other on this wild ride of raising tiny humans. We combine decades of experience with the latest research to create the modern parenting village. Let's dive into honest conversation about real parenting challenges. So it doesn't have to be this hard. I'm your host Alyssa Blask Campbell.

When we're supporting multiple kiddos in this work, I think of it like triaging the situation right? Where we're going to come in and figure out who really needs us most in this moment so that we can address kiddos in that manner. It's not always the child who is crying or screaming. Sometimes it's the kid who maybe hit somebody and then moved to the other side of the room. Sometimes they're the ones who need us most. So how do we do this? What does it look like? Well, first of all remembering that we get to set the temperature; we get to be the thermostat not the thermometer. So you're not just reading the temperature you are setting it if you walk into a situation and the cortisol or adrenaline levels are high and there's maybe screaming or yelling or crying and there's a lot of dysregulation. It's our job as the adult to self-regulate so that we can bring the calm. This is really challenging to do because your nervous system is going to mirror the environment you're in; you're going to spike that cortisol or adrenaline and when you notice this as long as everyone is safe first and foremost, we're going to regulate. Sometimes for me, this is turning down lights. Sometimes it's turning off music if that's on. It's almost always taking deep breaths. Your tone and your body language will communicate to that child's nervous system whether or not they are safe and so a huge part of bringing the calm and calming the space is making sure that you are regulated so that your tone can go from like, oh my gosh, this is so stressful to man, there are some big feelings happening in here. I want to help you solve this problem. I'm here to help. Your tone matters, your body language, if you're standing over top of a child, they will inherently feel threatened. So we're going to get down on their level. We're going to drop our voice. This is a huge part of mirroring. So we are going to bring that calm first and foremost now say everybody's still losing it, right? Like I'm picturing myself in a classroom of nine Toddlers and it's like that domino effect where one kid goes in the rest follow because they start to mirror that adrenaline or cortisol. And so I'll lower the lights lower the stimuli and sometimes I'm going to do something that's co-regulating like sing a song or hum a song. Sometimes I'm just going to validate first. Whoa, we're getting so close to lunchtime. Your bodies are so hungry. Oh man, it's hard to wait; validation can go a long way when the entire room is dysregulated and it's not because somebody took somebody's toy or hurt somebody else when we're just in a space of dysregulation that you have that like domino effect of, then I do like to tap into a coping strategy like man, oh, I need to calm my body so I can help you first. I'm going to dance to a song or I'm going to sing a song to calm my body down or I'm going to take 10 deep breaths and I would audibly take a deep breath and say one after and then keep counting to 10. I'm going to bring them into the regulatory process. If I know that there's one child who triggered the rest of this, so in an instance where there's a four year old who's having a rough time; they're trying to build something and they got really frustrated that it's not working and they start to cry and so then the infant in the room mirrors that and starts to cry and now they're both crying but I know that the root of it is that four-year-old then I'm going to pop over and I'm going to emotion coach the four-year-old. I'm going to turn to the infant and say "wow, it was really hard to hear your brother cry. He's feeling so frustrated." And then I'm going to turn and emotion coach the four-year-old, allowing the infant to feel that dysregulation for a minute while I support the regulation of the four-year-old and then we will all be co-regulated together. If you want to dive deeper into what emotion coaching looks like you can snag our free emotion coaching guide at emotioncoachingguide.com. It outlines the the steps for what this looks like.

Y'all 2021 is a here, we made it, we have arrived and that means that Mama's Getaway Weekend is just a few months away. We are going to hang out September 25th and 26th to dive into this work in person. Mama's getaway weekend is unlike anything else because in-person events with us are just so different. We dive into different workshops and get to go a little deeper into this work together. It's the only place that I'm presenting in person this year and we're going to bring guest workshops in as well. It's two days to step out of the day-to-day and build your toolbox. It's so hard to work on systems and do this work on ourselves when we're in the day-to-day taking a step back to build your toolbox. And to analyze what's going well, what can we tweak and look at the bigger picture can be so helpful. We have two full days of workshops on Saturday and Sunday and Saturday night. We gather for a mama's mingle where we need to just hang out, you get to be out having adult conversation and finding time to relax and just be. You get to recharge and bonus this year. I will be bringing my little babe to mama's mingle and we get to all hang out together. Mama's Getaway ticket price is going up at the end of February. So head over to Mamasgetawayweekend.com to snag your ticket today. Come join us for this life-changing weekend in Watertown, New York. mamasgetawayweekend.com

Thanks for tuning in to Voices of Your Village, check out the transcript at voicesofyourvillage.com. Did you know that we have a special community over on Instagram hanging out every day with more free content. Come join us at seed.and.sew take a screenshot of you tuning in, share it on the gram and tag  seed.and.sew to let me know your key takeaway. If you're digging this podcast, make sure to subscribe so you don't miss an episode. And we love collaborating with you to raise emotionally intelligent humans.