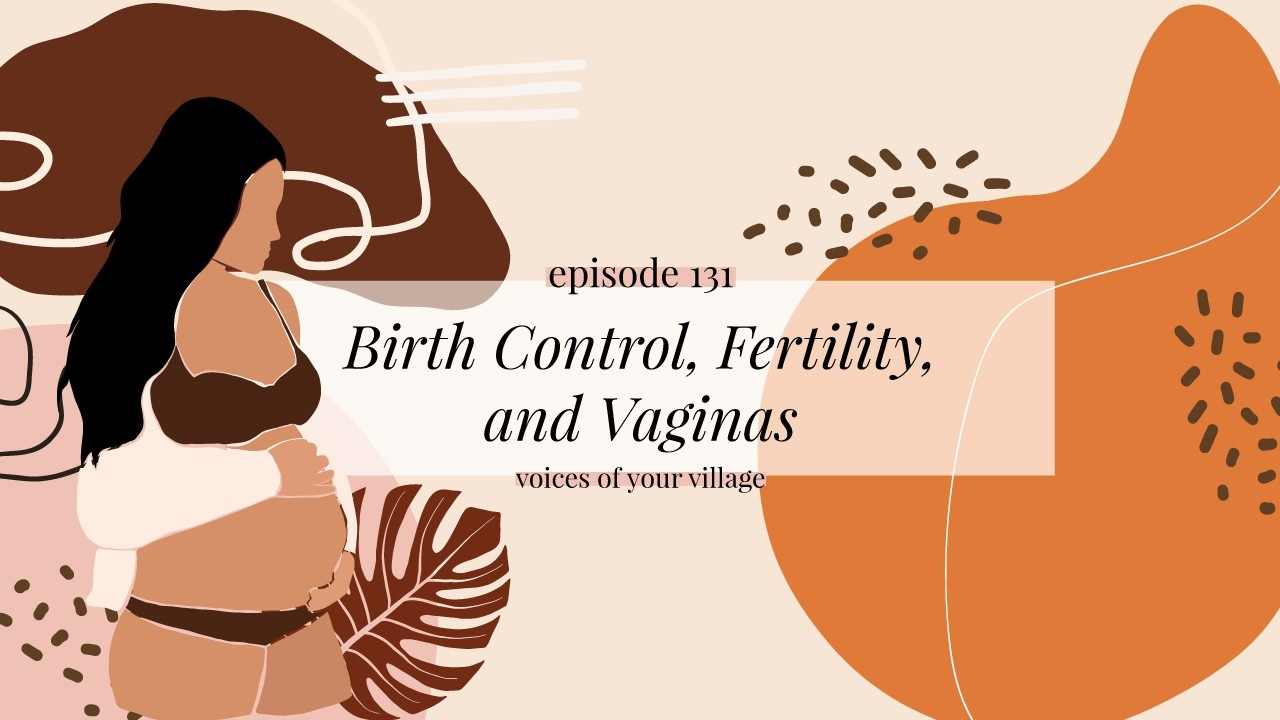 Hi, everybody! Welcome to another episode of Voices of Your Village. Today on Episode 131 we are diving into fertility and hormones and vaginas, oh my! I learned so much from Lisa Hendrickson-Jack, author of The Fifth Vital Sign: Master Your Cycles & Optimize Your Fertility. Her book is so fascinating and definitely not what I grew up learning about my body. For me it has played such a huge role in my fertility journey.

We wound up finding out that my body was really low in progesterone and that was most likely leading to my early miscarriages. You may have seen over on social media that I am pregnant again, and this happened from one month of supporting my progesterone production. One month in and we got pregnant! We're hopefully going to sustain this pregnancy with the support of some progesterone. And man, it is so wild how little information I had access to as a gal who had a period. For so many years, basically the last twenty, I have had a period. I had taken hormonal birth control for so long on my journey and it had so many effects on my body that I wasn’t even aware of.

“If we have kiddos who are born with a vagina I want to support them with tools to navigate birth control and hormones in a way that is supportive of their systems as a whole.”

This was not just an educational episode for me as an adult, but also for me to learn about how I want to support our kiddos if they do have a vagina. What will that look like? What can I learn to do better than I had growing up?

Also, heads up: when I recorded this episode, it was during the time period where I was in the middle of my second miscarriage. So you’ll hear a little bit about my miscarriage journey. If you are not comfortable hearing about that you can hit pause on this episode and come back to it another time. Without further ado, let’s dive into my chat with Lisa Hendrickson-Jack.

Lisa discovered fertility awareness at a pretty young age, when she became sexually active and wanted to manage her fertility and not get pregnant she decided to come off the pill. She had been taking the pill for pain and had never used it for birth control because she didn’t always take the pill at the same time she lived with the fear of getting pregnant- a fear she no longer wanted to live with. So, Lisa turned to using condoms. She grew up in a time where condoms were considered a safe and effective form of birth control, whereas now there seems to be this idea where you’re either on the pill or pregnant.

During this time Lisa discovered fertility awareness. The basics of which include knowing which days during your cycle you are fertile, and during those times having protected sex and outside of that you can’t ger pregnant. Combining fertility awareness with condoms is how she managed her fertility in her twenties. Then, she took a class on fertility awareness and began her process of teaching it and ultimately took it upon herself to spread awareness of fertility.

“Most women don’t know how their bodies are working. Our medical system and education system are not teaching us anything.”

I started our discussion by asking Lisa how we got to this point. What led us to this point in the global discussions (and lack of discussions) about women’s reproductive health where women are all but waving flags with “Pay Attention To Me!” written on them in big, bold letters.

“In a word, the answer is: misogyny.”

To expand, there are a few historic pieces of information that are necessary to know. First, science began as a study on the male human body. Even now, many drugs are never tested on women. Male bodies are considered to be the standard, and so often in science experiments, they would even work with male animals because the female anatomy is determined to be “too complicated.” The way that the female body is integrated into this conversation is that they are like male bodies, but with cool add-ons.

Then, when the first birth control pill was released in 1960 it wasn’t even legally promoted or advertised as birth control. Instead, it was advertised as a way to tend to periods because at the time it was illegal for doctors to talk to their female patients about contraception. So, it isn’t a huge surprise that even today women are not provided complete information about their menstrual cycles.

During the rest of our conversation, Lisa and I tackled all of my and all of your questions about fertility, birth control, and vaginas. We talked about ovulation and the root of the fifth vital sign. I loved chatting with Lisa and I know you will get just as much out of our glorious conversation as I did! Thank you, Lisa, for stopping by! For more of Lisa Hendrickson-Jack you can read her book The Fifth Vital Sign: Master Your Cycles & Optimize Your Fertility where she dives even further into all we discussed together, or you can learn more about fertility by listening to her podcast Fertility Friday or checking out all the incredible free resources she has up right here!

As always, come tell me what you thought about this week's episode over on Insta @Seed.and.Sew and you can find the Let’s Talk About Sex, Baby podcast episode that we discussed right here.