What a middle-schooler would like you to know about emotions, with Elijah 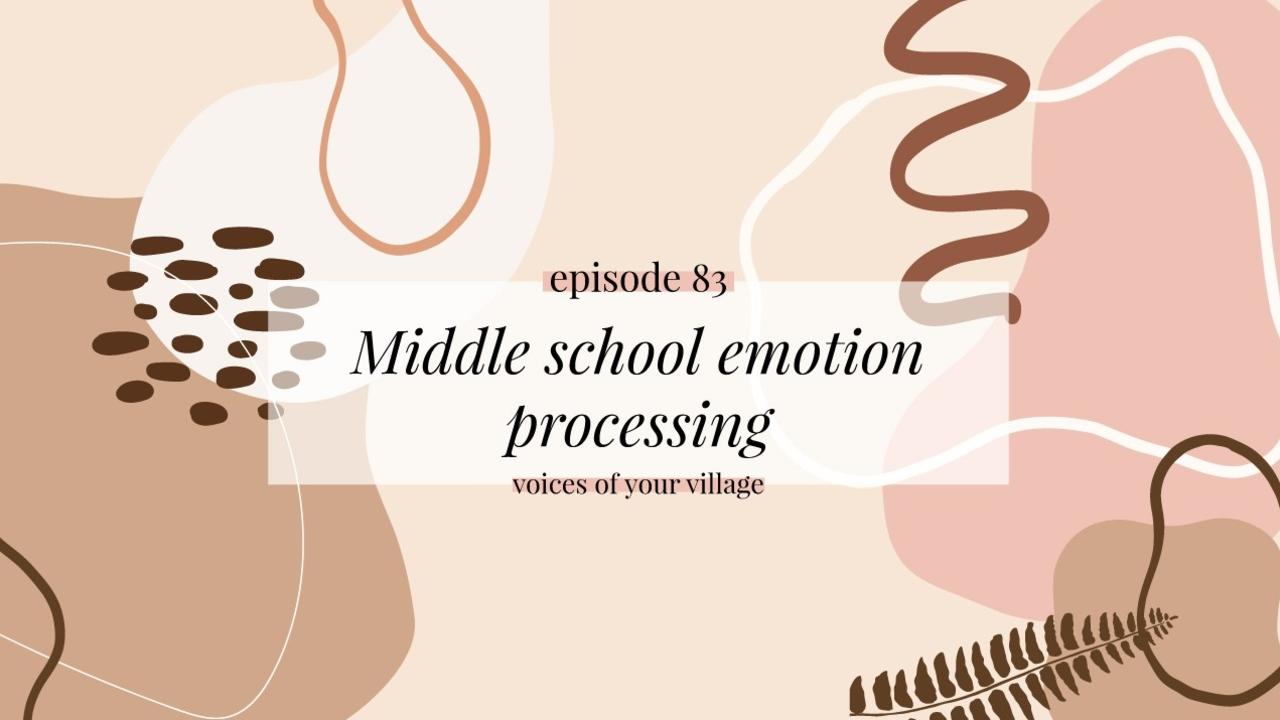 I’m so jazzed about this episode of Voices of Your Village because I got to sit down and chat with probably one of the most emotionally intelligent 11-year-olds you’ll ever meet, Elijah. His mom Danielle allowed us to share on Instagram and Facebook an exchange she and Elijah had in which she emotion coached him through a tough situation, and basically the response was that Danielle is serious #momgoals and Elijah is serious #11yearoldgoals. I wanted to chat with Elijah about being a soon-to-be middle school kid - what it’s like and how to navigate all of the hard stuff surrounding this unique time in life. We chatted about the difficulties of middle school and the hard feelings surrounding these new types of experiences. There are many different physical and social changes - potential first boyfriends or girlfriends, sports teams becoming more competitive, and so on.

Elijah shared how excited he is about having actual lockers in the hallway and gaining more independence as he heads into the 6th grade next school year. He’s “kind-of-but-not-really” nervous about transitioning from being part of the oldest group of kids in his school to the youngest group of kids in his school. He’s “not worried about bullying” because “the kids in this new school are nice.”

We reached out to you, our village, for questions you’d like to ask a middle schooler, and one of the most common was, “How do I help my child with all of the social aspects of this stage?” For example, what if they don’t get picked for the team, invited to the dance, or invited to a birthday party? How do we help them navigate these hard things? I explained to Elijah the tendency for us to not want to see our kiddos experiencing hard things and hard emotions. So, I asked him what he does and what some tools are that he taps into when he’s feeling hard things like sadness or disappointment. Elijah shared that a little screen time, music, or reading is usually what he turns to, and his advice to parents whose kid is mad is to just leave them alone for about a half-hou, because when he’s mad, he just wants to be alone and not talk to anyone for a bit. I brought up the situation that his mom had allowed us to share: he had set up a lemonade stand that he was supposed to work with his friend...who didn’t show up. Naturally, Elijah was disappointed, and to cope, he wanted to turn to Minecraft, but instead, his mom told him to instead do something physical first. Elijah decided to climb a tree for 15 minutes. I explained to Elijah the reasoning behind this - screens can be a good distraction, but then the emotion is just living below the surface, waiting to be triggered. When we do something physical (or even read a book), it helps us process the emotion instead.

I asked Elijah if he’s had to learn about hormones in school yet, and he said that they did at the end of fifth grade and admitted it was awkward and that he “doesn’t want to go over again.” I did want to share about the importance for parents to remember that their kiddos are going through hormone changes at this stage that totally affect them in tremendous ways, and we want to create a space where they can talk about it. Elijah feels like he can go to his mom with questions about these things, which is so rad. Yes, it can be awkward, even for the parents, but it’s so important we make our kiddos feel like they can come to us about it, no matter how awkward.

I asked Elijah, “What if you don’t get invited to a birthday party?” Elijah shared that he has never really experienced that because he’s chosen to keep his friend circle small. He’s got about five really good friends, and described how he’d rather have a small group of friends that he can trust than a lot of friends he’s not really close with. I laughingly told him he’s wise beyond his years because I didn’t learn that until my late twenties!

What about having experiences with other kiddos who don’t have the same level of emotion processing skills as him? Maybe at his new school, some kid he doesn’t know is rude to his friend. What would he do in that situation? He wasn’t totally sure but thought maybe he would comfort his friend. I added that it’s really important to be a person who has great emotional awareness like him for someone else who may not. It’s important to have people around us who will stand up with us.

We then chatted about screens a bit more in-depth because Elijah loves playing video games. I explained how my generation didn’t grow up with screens in the same way his generation is growing up with them (and then I proceeded to imitate the good ol’ dial-up sound for him!) There wasn’t access at all times like there is now. Parents wonder how to make sure all this screen time isn’t damaging for their kiddos. I was curious about Elijah’s perspective on this. I asked him if he feels like it changes his personal connection with others. For example, prior to this podcast, he shared with me that he and his friends can play video games with each other at their respective houses, as opposed to physically playing together. He believes it’s actually positive because his friends don’t get to see each other all that often outside of school, so it’s a way for them to connect when they can’t physically be together. He also pointed out that it’s a way for him and his dad, who lives far away from him, to interact - they play video games together while they are apart. I pointed out that my fear as an adult is that kiddos will choose to play video games in their separate houses over physically playing together. For him, if he has the choice, he’d rather hang out with his friends in person, so having the opportunity to play with each other remotely is utilized when they can’t actually be together.

We talked about any worries he might have going into middle school, and he’s not worried about much more than possible mean teachers. He explained how he doesn’t worry about studying hard or getting good grades because whether he studies or not, he gets a good grade. He acknowledged that he knows other kids who do feel that type of stress and possibly put more pressure on themselves than he does. He shared about a girl in his small-group advanced writing class who is a great writer but doesn’t recognize that in herself. I wondered out loud where that comes from - why he has a confidence in himself that he sees others are lacking - is it how he was raised? What he hears at home about how great he is? How does what he’s hearing from others foster confidence? I also wondered out loud how he and his peers could support her or reinforce any positive feelings about herself. He explained that when she read her piece to the class, everyone told her how great it was and that she should be more confident about her writing. I emphasized the importance of acknowledging the positive things about others. We have a tendency not to say these things to people enough because we assume they know. Parents, we have to say it; kids don’t just know it about themselves.

I asked Elijah what he thinks he’s crushing in life and what he’s working on in life right now. He mentioned how he has a hard time processing the emotion of anger. I shared with him that commonly when boys are very tiny humans, grownups don’t let them express emotions like sadness or disappointment. If a boy cries they may hear, “Suck it up!” What happens is that down the road, these emotions come out as anger because they haven’t been allowed to feel the other emotions growing up. I think it’s important for us to teach boys that it’s okay to feel the full range of emotions. Elijah shared that he feels anger the most when he does something bad, on accident or on purpose, and he gets punished for it because as he says, there is nothing he can do about the punishment. I shared with him that I was actually a kid with lots of experience with punishment because, even as an adult, if you give me a rule, I can’t wait to break it. I explained that it’s beneficial to consider if I don’t want to receive that punishment again, what lesson am I supposed to learn about the behavior that led to the punishment? I can change that behavior that led to the punishment to avoid the punishment next time. It’s most frustrating to him when the punishment is no video games because playing video games is his go-to coping mechanism. So, this is a lose-lose situation for him - he’s angry about his punishment of no video games, but can’t play video games to cope with the anger. Since playing video games is a coping mechanism rather than a coping strategy, I shared with him that it only temporarily makes him feel better and that he should use coping strategies to allow him to actually process the emotion - to move the cortisol out and genuinely feel calm. Reading a book, climbing a tree, going for a run, drawing, playing music, are all coping strategies. After engaging in one of these strategies, then it’s okay to turn to video games.

I ended our chat by asking him what he wishes his middle school teachers and his parents knew as he’s going into middle school. He wishes that his teachers and his parents knew that he feels anger and emotions, too. Kiddos are going to feel hard things and the best thing parents and caregivers can do is make sure their kiddos know it’s okay for them to feel all of the things, and that we’re going to be there to support them.